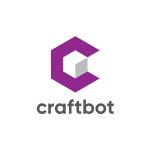 CraftWare 3D is free-to-use, fast, easy slicer software that converts the digital 3D object into a .gcode toolpath format understood by most 3D printers. CraftWare primarily works as a slicer for solid 3D digital objects, but it is also an excellent tool for many other tasks. . CraftWare also utilizes the most impressive gcode visualizer on the market; this allows users to see each print layer-by-layer, from any angle, easily allowing them to detect any areas that require modification prior to.

CraftWare 3D comes with a free demo that can be downloaded by the users from the vendor website. Apart from this, there are multiple videos available online that can be used by the users for understanding the software in detail and for making the best use of it.