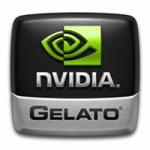 Gelato 3D Rendering Software is designed from the ground up to leverage the NVIDIA GPUs' vast floating-point capabilities, eliminating artifacts that are appropriate in real-time rendering but not in offline, high-quality rendering. On quality, it never compromises. The software also has a higher-level interface than the GPU's native renderer, allowing for more flexibility and the ability to use advanced technologies, such as global lighting, that hardware is not yet capable of.

Gelato 3D Rendering Software is an offline, hardware-accelerated renderer developed by Nvidia, a graphics card manufacturer. Crafted to create images of film quality, Gelato 3D Rendering Software uses a language of shading which is quite similar to RenderMan's. The software application is a GPU-accelerated, final-frame renderer that produces high-quality images. Initially designed for film and television effects and animation, it is useful for any application involving high-quality rendering including game creation, CAD, industrial design, architecture, etc.

Most software companies and vendors require you to contact them with details so they can offer competitive personalized Gelato pricing based on your needs. For the best Gelato pricing plans, contact the vendor.

Gelato to be a compellingly powerful renderer, and rippingly fast when it works. Gelato uses both the CPU and the GPU, which is also a factor in the overall machine configuration. And present success is just the start. For GPUs doubling capacity at "Moore''s Law Cubed," Gelato''s performance increases would occur faster than CPU-only renderers''.
Read less Read more
Useful (0) Not useful (0)