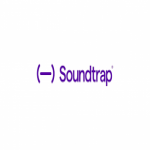 Soundtrap provides a light, cloud-based system for musicians and podcasters from around the world to create, collaborate, and edit tracks. With the latest features like autotune, and its ability to run on any device, Soundtrack can be used on the go to create professional tracks.

Soundtrap is a cloud-based collaborative music studio and works across different platforms. The software allows anyone to collaborate with artists from around the world and is also a powerful editor for podcasts. It has the ability to record and edit on multiple devices while the actual content is stored on a cloud-based system.

It has an integrated feature of chat and video calls for collaboration which makes it stand out from the crowd. A very handy workstation as it can be used on different platforms i.e  Windows, macOS, and Android.

Soundtrap is available for creating and editing both music and podcasts.

Soundtrap is also available for education. The education software offers two plans based on the number of users:

Soundtrap has a free version where users get access to a limited number of features. Users cannot download any track created with this version. While an unlimited number of projects can be created, the user does not have access to the sounds from the Soundtrack library. However, each price plan also offers a one-month free trial which can be canceled at any time.

The software is affordable and gives full value for money. Soundtrack allows artists from around the world to collaborate on tracks from virtually any device.
Useful (0) Not useful (0)